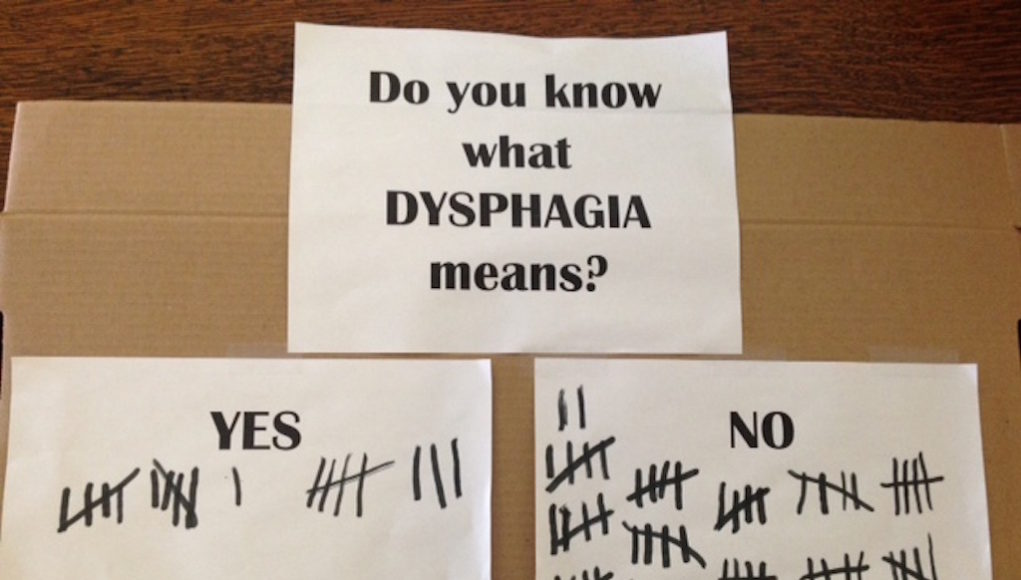 “Do you know what dysphagia means?” We asked 104 people this question in an informal poll at Boston Medical Center and only about 17% said yes. As for the other 83% of people who did not know what dysphagia means, many of them were not aware –even when the word was defined for them– why someone might have problems with swallowing. Even more alarming was that some medical staff (RNs, MDs) did not know what dysphagia means. To be fair – this is not a well-integrated part of medical training. And, yes, dysphagia is a medical term that is unfamiliar to those not working in a medical field. But studies estimate that the overall prevalence of dysphagia is around 11-13%1,2, although this varies widely depending on many factors such as age and health condition. For speech pathologists working in a medical setting, dysphagia is a large piece of the case load and the crux of clinical and research focus. Clearly, there is a missing link at the very start of the chain of events that should occur to (1) help those with dysphagia and (2) learn more about the disorder. Such lack of awareness (in both the medical field and the public in general) prevents all of the subsequent events that are in place to provide patients with adequate care. It also prevents discovery about the disorder through research, which precludes advancement in the field. This giant lack of awareness inspired Dysphagia Awareness Week at Boston Medical Center.

June is National Dysphagia month. The United States government publishing office has posted the congressional record stating so3. But on the large, most people are unaware of this disorder, what causes it, and what treatment is available, as evidenced in our recent informal poll at Boston Medical Center. Even when the word was defined, many people reported not knowing what to do if they or a loved one had a swallowing problem. (For example: what are the symptoms of a swallowing problem? Who they would want to see in the medical community? What type of evaluations or treatment to expect.) One in every 20 people has difficulty swallowing, usually from a stroke, neurological disease, cancer, reflux, trauma and/or surgery4. Statistics suggest that you may know someone who has dysphagia. Therefore, there is a missing link between the high prevalence of dysphagia and the general awareness of its existence in the population.

Raising awareness is important for several reasons: to support those with swallowing problems, know about symptoms and treatment, and support research. Dysphagia means problems with swallowing (dys– disordered and phagia– swallowing). A swallowing disorder not only affects one’s safety but also their quality of life. Problems can range from severe instances of a complete inability to swallow requiring an alternate means of to obtain nutrition, to mild problems such as needing liquid to wash down tougher foods like bread and meat. Some people complain of coughing on liquids. Others say food gets stuck in their throat. Symptoms vary widely and depend on the cause of the problem.

Dysphagia can lead to very serious complications like pneumonia, malnutrition, weight loss, depression, and a decreased quality of life5,6,7. In fact, patients considered well-being outcomes, like social factors, to outweigh the importance of health outcomes, like pneumonia8. Raising awareness will help:

At Boston Medical Center, we chose to celebrate Dysphagia Awareness month during the first week of June. We had many ongoing activities to increase awareness of dysphagia:

The day was a great success. We had 7 volunteers running a booth in the lobby.

One of the best moments was speaking with the mother of a girl who is afflicted with dysphagia. She said she was “all too aware” of the struggles experienced by those with dysphagia, particularly the social isolation and the lack of understanding and awareness of the general population. She was incredibly happy to see efforts being made to increase awareness, especially to improve social situations for those with dysphagia and increase the attention and research afforded to the field.

Our big signs, fun games, and yellow t-shirts attracted many people; approximately 130 people (including patients, patient caretakers and family, medical professionals, and BMC staff) stopped by the booth to inquire about dysphagia. Popular topics of interest were the meaning and causes of dysphagia. Surprisingly, the majority of people who came to the booth did not know what dysphagia meant and were not aware why some might experience swallowing problems. However, many, many people were interested in discussing gastroesophageal reflux disease (GERD) and larygopharyngeal reflux (LPR). Many people were interested to learn more about the types of reflux and what types of treatment are available.

One of the best moments was speaking with the mother of a girl who is afflicted with dysphagia. She said she was “all too aware” of the struggles experienced by those with dysphagia, particularly the social isolation and the lack of understanding and awareness of the general population. She was incredibly happy to see efforts being made to increase awareness, especially to improve social situations for those with dysphagia and increase the attention and research afforded to the field. She wished all of her daughter’s classmates could appreciate what dysphagia is and why her daughter has trouble swallowing.

In speaking with people with dysphagia, many mentioned having issues in social settings like restaurants and family get-togethers. Some of those who came by the booth made statements such as “I start coughing and coughing and everyone looks at me” and “I haven’t had a piece of meat in years.” It is clear why those with dysphagia have a lowered quality of life. Through efforts like Dysphagia Awareness Week, it is hoped that statements like these can be better appreciated and understood by not only the public, but also by medical professionals.

A Light in the dark

D-CAF: An actual café that serves patients with dysphagia