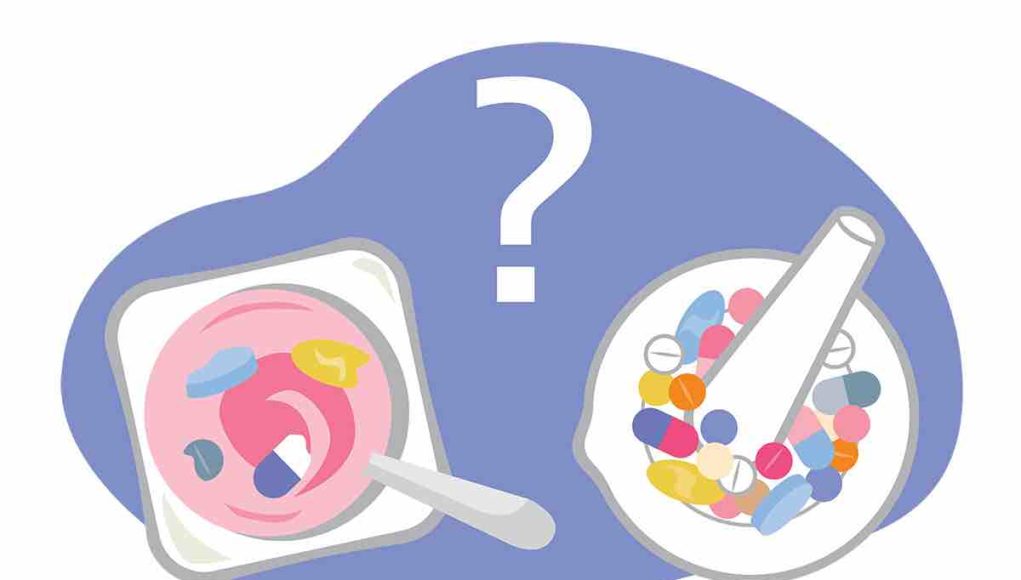 Swallowing issues swallow up a lot of time for speech-language pathologists. According to AHSA,1 SLPs working in adult settings spend about 40% of their time on swallowing issues, and even more If they work in medical or long-term care facilities (LTCFs).

If this describes your practice, you are probably used to seeing care providers crushing tablets and mixing with applesauce or other seemingly harmless things—fruit juice, pudding, thickeners—to make swallowing easier. But crushing and mixing can alter the effect of medication and put patients at risk. As an integral part of the patient-care team, SLPs should ensure that clinicians understand the implications of crushing and mixing and adopt policies to reduce risk of variable dosing or patient harm.

The Australian Don’t Rush to Crush Handbook, a required reference for Australian pharmacists, includes information on the impact of crushing 570 medications. As the name implies, the default position for caregivers is not to crush unless the therapeutic impact of crushing is understood for each specific drug tablet. The handbook cautions that for each medication provided, the caregiver should be able to answer a series of questions, including:

Immediate-release medications are still commonly crushed to facilitate swallowing. However, even when this practice is not contraindicated by the manufacturer, crushing may introduce a high risk of incomplete or variable dosing.4 Crushing has also been found to impact dosage in varying degrees according to the crushing device used,5 and improper cleaning of crushing devices introduces risk of cross-contamination and potential allergic reactions in patients.6 For some medications such as warfarin or amiodarone, crushing–even when not contraindicated–may result in clinically significant adverse outcomes.7

Legal and occupational risks of crushing

The law requires that medicines should be given to the right person, at the right time, in the correct form, using the correct dose, via the correct route.8 Off-label crushing or opening of medication, and/or mixing medication with food or beverages prior to administration, has legal implications. If pill crushing has not been authorized by a manufacturer, the liability for any resulting patient injury rests with the administering care provider.9 For these reasons, providers are advised to avoid pill crushing as a general practice, consult with the prescriber and the pharmacist before altering dose forms, and keep accurate records of such discussions and subsequent actions.10

While nurses and pharmacists often harbor concerns about dosage form manipulations,11 the risks associated with crushing and mixing may be less well understood in LTCFs. An observational study7 of medicine administration among 586 residents in 10 LTCFs reported alteration of at least one medicine in 46% of observed cases. Notably, 17% of medication alterations had the potential for detrimental outcomes such as increased toxicity, decreased efficacy, or unpalatability. Spillage occurred in 70% of cases where medicines were altered, potentially reducing the prescribed dose.

The worm in the apple(sauce)

While mixing crushed medications with applesauce, juice or thickeners may not pose a direct health risk (beyond that of the crushed medication itself), such substances may well alter the dissolution rate and drug effect (i.e., bioavailability) of medications.12,13 It depends on the specific drug being administered. While applesauce has been demonstrated to have no effect on some medications,14,15 it has a substantial effect on others.16,17 Fruit juice may have a significant effect on drug levels, either by magnifying drug levels (grapefruit juice) or reducing them (apple or orange juice).18-20  In such cases, the risk lies in variable or incomplete dosing.

Use of refrigerated substances such as applesauce as swallowing vehicles must also comply with each facility’s infection control policy. To prevent contamination, such policies may include restrictions for dispensing of refrigerated foods, including no use of open containers on med carts and strict time limits for their nonrefrigerated use.

Alternatives to crushing and mixing

Being human, care providers are not likely to change their ways unless attractive and simple alternatives are available. Fortunately, options are available for making pill swallowing easier without crushing and mixing. These include pill swallowing gels, which are registered as medical devices and designed for use both in healthcare and at-home settings, and mouth sprays and coatings for at-home use.

Pill swallowing gels (PSGs) can be used in place of food, juice, or thickeners to facilitate swallowing of whole tablets.  A small quantity (~5 ml) is placed over the tablet on a teaspoon or med cup to administer the medication.

PSGs have been widely used in Australia, where they are recommended as a front-line tool to aid medication administration in patients with mild to moderate swallowing difficulty.21 The only commercially available PSG in the United States (Phazix®, Arkray USA, Minneapolis, Minn.) is available in (IDDSI) levels 3 (moderately thick) and 4 (extremely thick). This product is also flavored to mask the taste of medications. The 500mL pump bottle product can safely remain at room temperature (e.g., on a cart) for 60 days with a normal disinfectant wipe-down of the container.

Though composed entirely of food ingredients, Phazix® (formerly known as Assure Slide®) is registered with the FDA as a Class 1 medical device, as it is intended to assist a patient to perform a specific function and it does not achieve its intended purpose through chemical action. The product can be used by anyone who has difficulty swallowing tablets, capsules and powders and can swallow independently. It should not be used for patients with impaired swallowing reflex or patients who choke when eating solid food.

PSGs have been well accepted by care providers. A 2019 survey22 of 355 healthcare workers in Australian LTCFs found that 48% of respondents had used PSGs. More than 80% of respondents that had used PSGs believed or tended to believe them to be an effective method to facilitate pill swallowing. Easier medication administration (48%), reduction in the need to crush pills (34%), and better medication compliance (33%) were reported as the main benefits of use.

Other pill-swallowing aids include mouth sprays and pill coatings focused on at-home consumer use. Sprays are delivered to the back of the mouth and tongue before taking tablets or capsules, while coatings are applied directly to tablets. Useful as they may be for many consumers, these products are not registered as medical devices and do not eliminate the need to swallow tablets with water.

Crushing of tablets or pills introduces patient risk unless done in full awareness of its effect on the properties of a specific medication. Mixing crushed medication with foods, juices, or thickeners may alter a medication’s bioavailability, introducing risk of variable or incomplete dosing. Pill swallowing gels are registered medical devices suitable for use in healthcare settings as well as by patients at home. Mouth sprays and pill coatings are best suited for at-home use. As integral members of the patient care team, speech-language pathologists should educate care providers on the implications of pill crushing and mixing and alternative methods of easing swallowing for patients.

A special commencement for the class of 2021 from Dr. Georgia A. Malandraki

Leadership: Empowering and championing by example