Congenital aglossia (CA) is a rare syndrome in which an individual is born without a tongue. It was de Jussieu in 1718 who first reported this syndrome. In the past 300 years 9 reports of isolated CA, without the presence of other syndromes or symptoms, have been reported.(1-17) (1,13,14,15 same case) (2,3,7 same case). There is a consensus among the former authors of congenital aglossia literature that the hypertrophied mylohyoid and tongue base act as a pseudo tongue, and that this pseudo tongue is successful in augmenting the person with congenital aglossias (PwCA) ability to speak and swallow in a perfectly functional and relatively normal fashion. In effect, the mylohyoid has hypertrophied from infant sucking as has the base of tongue, therefore providing compensation for loss of structure. There has been however only one attempt in the literature to describe or scientifically document the process of and anatomic structural relationships and physiologic associations that occur during swallow in the PwCA 2,3,7.

Modified Barium Swallow (MBS) in a case of congenital aglossia

In 2012, a modified barium swallow was administered to a 43 year old PwCA by Dr. Rebecca Leonard. The PwCA was not on a special diet and did not complain of needing any adaptive changes to meals. The results help us better understand the process of swallow with someone born without a tongue. 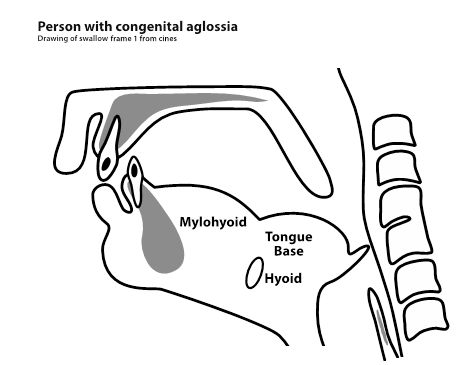 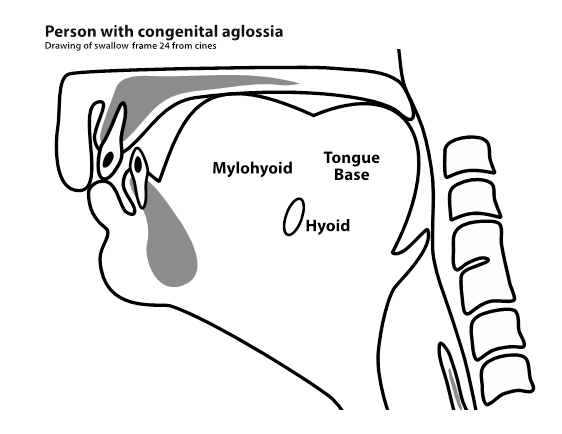 A second MBS was completed on the same PwCA in 2013 and was interpreted by Angela Mandas, MA and Dr. Shelley Von Berg.

In a publication in progress (18) the authors studied positional movements of the PwCA pseudo-tongue, (mylohyoid and base of tongue), mandible and hyoid and found that the pseudo tongue had various and often independent relationships with mandibular and hyoid bone movements during oral saliva swallow and speech. The highly predictable correlations of muscles for deglutition and speech suggest that this PwCA essentially ‘bootstrapped’ muscular actions (and limitations therein) developed for deglutition and used them to buttress speech and resonance as she matured. These actions are quite different from those of individuals with a tongue, who recruit a variety of muscles for the diverse acts of speaking and swallowing.

The authors suggested that the compensatory strategy of “bootstrapping” for speech should be adapted by speech language pathologists when working with individuals with congenital or surgical oral-facial anomalies that involve the loss of or damage to the tongue structure. Focusing on that act of sucking, as in the case of this PwCA, could potentially activate compensatory muscles such as the mylohyoid, and cause them to develop in a hypertrophic manner, which would then serve as articulatory structures for the development of intelligible speech.

Where we fall with ARDS (Part 1): The Rabbit Hole