Dysphagia Cafe
Home International A Long Way Round: The Journey from Brain to Muscle to Your... 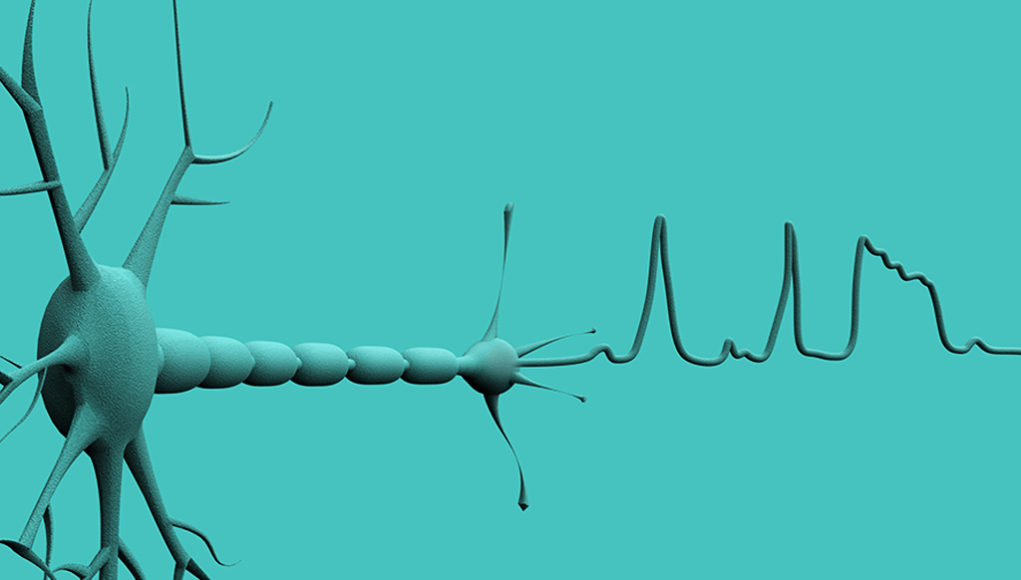 Much like an exciting motorcycle trip with Ewan McGregor and Charley Boorman, signals travel from your brain to your muscles to your surface electromyography (sEMG) sensor and end up on your screen. This article covers this trip and provides clinicians with pointers on best practices when using sEMG biofeedback.

sEMG and your patient

You begin dysphagia exercises with your patient using your sEMG biofeedback system and see a signal on your computer screen that may look like the one below (figure 1). Even if you’ve never used sEMG before, you can deduce very quickly that when your patient swallows, the blue line goes up, and when your patient relaxes, the line is flat. But what does this line mean in relation to your patient’s swallow? And why is the vertical axis in mV (microvolts)? Aren’t newtons (N) the unit for force? Or maybe kilopascals (kPa) for pressure?

These are all excellent questions, and I hope to answer them in this article. My goal is to make what I think is a beautiful technology accessible to everyone who is interested in understanding it just a little bit more.

From the brain to the muscle

Our journey begins in the brain of course. We know that our brains are brimming with electrochemical activity. An adult brain is said to contain over 80 billion neurons (Azevedo et al., 2009). That is almost as many stars as there are in our galaxy! Each one of these little neurons can send off several messages (called action potentials) per second letting you do everything you do: anything from picking up a pen, to reading this article, to swallowing safely and efficiently.

Most people reading this article are likely already familiar with messages (action potentials) making their way from the cerebral cortex down to cranial nerves and all the way to muscle fibers (figure 3). In the example shown in figure 3, the nerve of the mandibular branch of the trigeminal nerve is seen innervating the anterior belly of the digastric muscle (Kim & Loukas, 2019). Super! But how do these signals result in muscle movement?

The anterior belly of the digastric, much like most muscles involved in swallowing, is striated (Shaw & Martino, 2013). If we were to zoom in on it closer and closer, we’d find that cells from these types of muscles (called myofibers), are made up of myofibrils, which are made up of sarcomeres, which in turn are made up of tiny repeating units containing actin and myosin filaments. Now we’re really zoomed in! That’s okay, we needed to get this close. It’s the action of these little filaments that ultimately results in what we call a muscle contraction. The neuron in figure 3 (blue line) is called a motor neuron. When a motor neuron touches a muscle, the action potential spreads inside the muscle cell and triggers a chain reaction that ultimately results in muscle contraction. To sustain a muscle contraction (and not just a simple twitch), repeated activation must occur.

From the muscle to the sensor

sEMG sensors detect action potentials at the level of the skin and hence, those action potentials may come from different muscles under the surface of the skin. For example, sensors placed in the submental area may be picking up signals from the anterior belly of the digastric, but also from the mylohyoid and the platysma. Consequently, sEMG signal can vary depending on slight differences in sensor placement. Also, the signal or messages have undergone some modification just by virtue of having passed through all the layers of adipose and skin tissue to arrive at the sensor.

From the sensor to the screen

The sEMG signal picked up by the sensors is recorded by the device you’re using and undergoes further modifications, this time not from your body’s own tissues, but rather programmed in by biomedical engineers. Although the rationale for these modifications is the same across companies, slight variations exist on how it is achieved. These modifications may include making the signal bigger (amplified) and making the signal all positive (rectified). The signal may also be filtered to remove or reduce electrical noise and movement artifacts (Stepp, 2012). And lastly, the signal may be turned into a smooth outline or “envelope” for easier interpretation (smoothing). The resulting sEMG signal shape such as the one in figure 1 is easy to interpret quickly and can be used by clinicians to monitor muscle activity. What this means though is that one companies’ 100mV might be another’s 95mV.

When working with patients, sEMG biofeedback can be used to teach and practice various swallowing exercises. For example, sEMG signal for a regular swallow may look like a simple peak (figure 5, (a)). When completing an effortful swallow, the shape of the signal may look like that of a regular swallow, but the peak is higher (figure 5, (b)). This is because more effort may result in more motor units being recruited and hence more action potentials being detected by the sensor. When completing a Mendelsohn maneuver swallow on the other hand, the shape of the signal will change to resemble the flat mountain from a beloved classic movie, Close Encounters of the Third Kind (figure 5, (c)). This is because of a sustained muscle contraction over time.

What are some important takeaways for using sEMG in the clinic